Kind of lost: Using a VPS that already serves stuff

Hi!
Love the project, but I haven’t figured out how to make it work on my existing VPS.

I have an OVH VPS that runs 3 or 4 docker intances with different services (some run with port 8080, other with 9797, etc).
I use Caddy to link a different subdomain to those ports.

how would it work? I need to redirect another domain to Caddy so that it sends traffic to boringproxy? Or it needs to be run in another vps?

Hey @Alejandro_Sophila, you can make this work with the single VPS. Personally, I would just replace Caddy with boringproxy unless you need/want special features provided by Caddy (it has many useful features that boringproxy is lacking). In this case, for the services running directly on the VPS, in boringproxy when adding the tunnels you would use the following settings:

If you decide to leave Caddy in place, you’ll need to run boringproxy behind it. Note that others have run into issues with running other reverse proxies behind boringproxy. I feel like there are still some bugs with this setup. See here. I think you’ll need to use several options when running the server, including -allow-http, -behind-proxy, -http-port, -https-port.

Oh, this actually answers my question (Having trouble running the server) but i can’t get it to work…

I stopped nginx running so i tried to reverse proxy i was already running throgh nginx with boring proxy following your instructions, and it’s not getting the requests:

I tried setting the tunnel without and with “Allow External TCP” 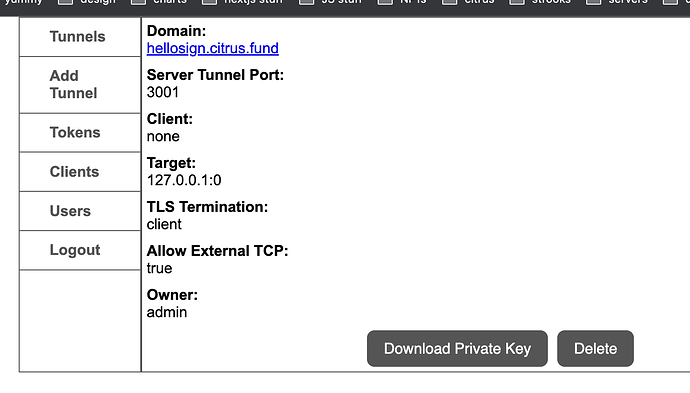 Only obvious thing is that TLS Termination needs to be Server HTTPS. Looks like you’re sending a webhook? Can you try a simpler setup that doesn’t involve a 3rd party, just to make sure you have everything up and running? Something like a basic webserver (python3 -m http.server).

Allow External TCP shouldn’t affect what you’re doing. That just sets up the SSH tunnel so services can connect directly to the port without going through boringproxy.

Wow, it worked perfectly, also with the webhook setup.

So you’re telling me i can just ditch nginx?
Is there any disadvantage you see using this vs nginx for production sites?

Again, thank you so much, you are doing god’s work

Having trouble running the server